The list of Gen X things loved by the Gen Z kids in my life is pretty extensive - Atari, Rubik's Cubes, fiber optic lights...and one thing they really love is pet rocks. We've decided to bring out the pet rocks for the summer and maybe adopt some new ones.

Last summer, we took some photos of Rocky (my daughter's pet rock) and Skippy (my Godson's pet rock). We'd like to share them with you now.... 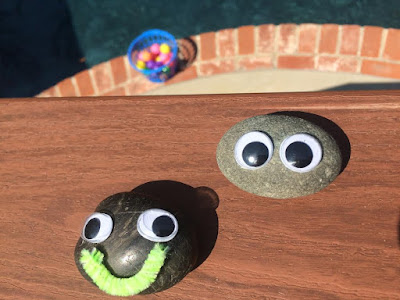 Skippy, who is always smiling, and Rocky, who is often in a state of surprise, talked about going for a swim. They brought out the pool toys, but then got concerned about sinking. They decided just to sunbathe instead. Then, later, they decided they did want to swim after all and got onto a tiny inflatable raft. 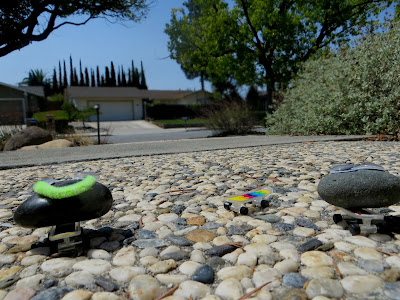 Rocky and Skippy, on their skateboards, hanging out on a hot summer day. The plan was to do some cool tricks, instead they starting zoning out, and stared straight up at the big, fluffy clouds passing by.... 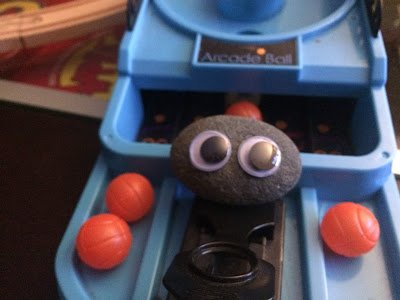 Rocky, after Skippy flew back home from his visit. As you can see, he wants to be flung from the launcher to score points. He's all about arcade ball, and he's a big talker, but he doesn't really know how to play.

Pet rocks like to give hugs, but they don't have arms, so they just snuggle comfortably on your cheek.

More pet rock pictures on the way soon...it's going to be a very fun summer!

Posted by Chloe Koffas at 6:52 PM No comments: