In Spite of Everything


In Spite of Everything, by Susan Gregory Thomas, is a memoir I read recently that is a reflection on the larger collective experience of Generation X.  While her thoughtful honesty and humor drew me in, there was this painful familiarity I felt as her story echoed the experiences of my own life and many Gen Xers I have known.

She mentions in the book that according to U.S. census and other data, almost half of all Generation X children's families split and 40 percent were latchkey kids. She makes the point that the "benign neglect" concept that was commonly embraced by Boomer parents in how they raised Gen Xers during the '70s and '80s wasn't so benign after all, and in many cases, it was truly just neglect.


There is a lot of insight in the book on how the difficult childhoods of many Gen Xers has made us want to give our kids what we didn't have, and has made us become the kind of parents we wish we could've had, and how in spite of everything, our best intentions don't always lead us to where we thought we were going. She does a beautiful job of telling her story as part of our larger generational story: her parents divorced the same year mine did. 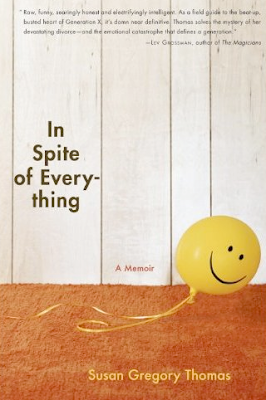 With extensive knowledge of classic literature, she makes references to everything from Greek mythology to Proust to illustrate her struggles, and to a large extent the struggle of the lives of many Xers as we have tried to recover from childhood wounds and to hold our relationships together in the present.  Among the timeless literature she references, she points to the Bible and sees scripture as a way of finding peace among the stress, confusion, and loneliness of our lives.  She mentions the technique of Lectio Divina, which she began to use when going through a dark point in her life.  She points to God as a place of solace, she points to Christ as "the very definition of hard-core punk." No doubt that is the highest compliment a Gen Xer could give -- I have always felt that way, too.

An excerpt from the book that explains what has defined each generation over the last several decades:

"It is a hard truism that each generation is shaped by its war.  The Greatest Generation was forged by WWII; Baby Boomers were defined by Vietnam and the civil rights and antiwar movements. Generation X's war, I would argue, was the ultimate war at home: divorce.  We didn't get Purple Hearts or red badges of courage, nothing that could be culturally shared or healed.  Our injuries were private, secret, solitary..."

The hope that rises from her suffering is that in spite of the fear that we all are randomly in orbit around some larger force out of our control, we may actually be deeply connected because all matter in the universe is made of the same substance.  In spite of our fear that we are ultimately alone, it may be that we are far more connected to one another -- much than we ever would've imagined.

Posted by Chloe Koffas at 6:36 PM No comments: