The Edge of the West Coast

We stood at the edge of the West Coast, and while night had fallen over all of the rest of America, we were the last ones to see the sun.


I had gotten together with four friends from my growing up years, the first time we'd all been in the same place since all of us graduated from high school together.  Now eighteen years have passed since that day, and we had a chance to look at our lives collectively, knowing that we have lived as many years over again as we had lived when we were first setting foot out into the world.

The dwindling of summer. 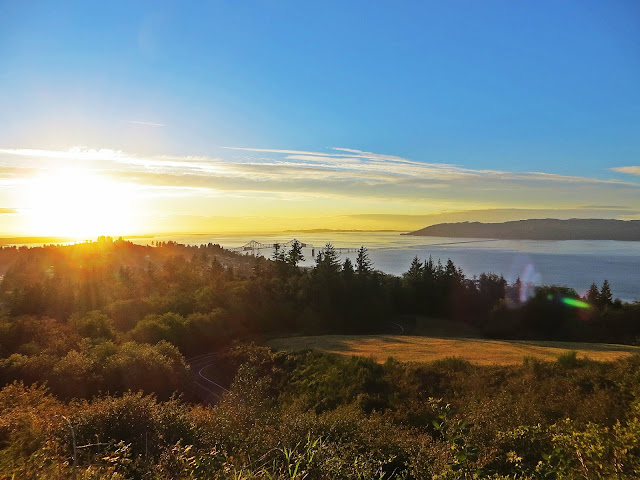 All the blessings, and disappointments, and struggles, the knowing that the there is still so much work to do.  All the things that don't work out in life the way you thought they would.  And all the things that did.  I love my friends even more now in our thirties than I did when we were in our twenties.   Our weathered hearts are wiser now.  We stood where the Columbia River flows into the Pacific Ocean and watched the sun descend.  Between the five of us, we have now lived in or seen all of America.

"I was...at the dividing line between the East of my youth and the West of my future."


And I know that friendships are not to be taken for granted, and I know that anytime you've been in a friendship for longer than a four hour Greyhound bus ride, eventually everyone has something to say "I'm sorry" for.  And everyone should say, if they can, "I forgive you".

And our time on this earth is so short.


"What is that feeling when you're driving away from people and they recede on the plain till you see their specks dispersing? - it's the too-huge world vaulting us, and it's goodbye.   But we lean forward to the next crazy venture beneath the skies." 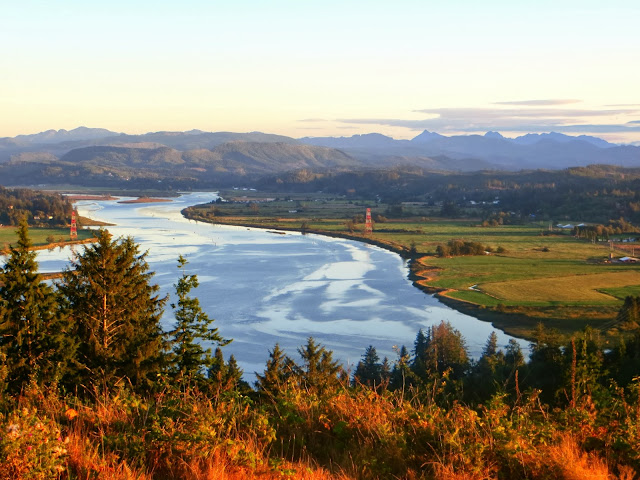 To left of where we were standing - Youngs Bay turns into the Lewis and Clark River.

When my friends and I stood at this viewpoint, I thought about how much I had learned from each one of them. With some of them, our friendship goes back almost 25 years. I stood under this blue and yellow sky and realized that each one has taught me better how to love. I realized that all the soreness in my heart I was feeling the moment I took these pictures was the stretching and growing of it so it could become larger, more capable of believing anything is possible. 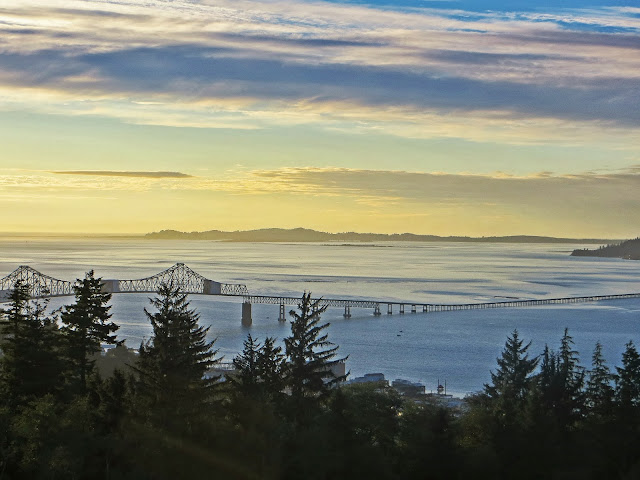 To the right of where we stood - a bridge that is part of Highway 101- the route the connects all the states of the West Coast....

"...in America when the sun goes down and I sit on the broken-down river pier watching the long skies over New Jersey and sense all that raw land than rolls in one unbelievable bulge over to the West Coast, and all that road going, and all the people dreaming in the immensity of it...and tonight the stars'll be out...the evening star must be drooping and shedding her sparkler dims on the prairie, which is just before the coming of complete night that blesses the earth, darkens all the rivers...and folds the final shore in, and nobody, nobody knows what's going to happen to anybody besides...growing old..." 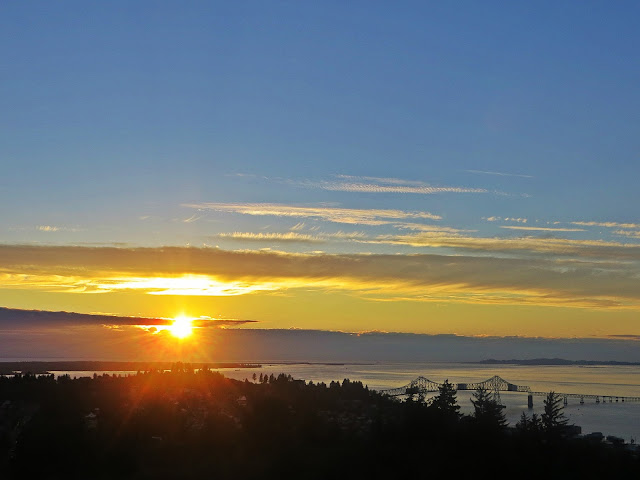 All quotes in bold from On The Road by Jack Kerouac

Posted by Chloe Koffas at 8:30 AM No comments: 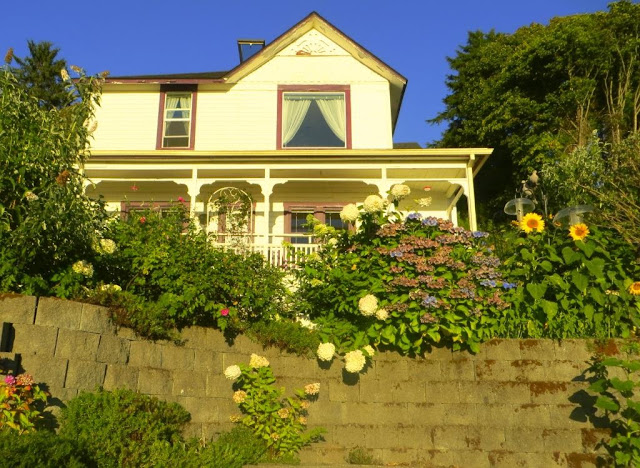 The Goonies is a movie well known to Gen X.  Many Xers saw it in theaters as kids or teenagers when it came out in the mid-80s, and it soon became a cult classic.  This summer I got together with four friends from my growing-up years and we all went to see the house from the movie together.  All five of us got together to catch up in Portland and to take a road trip out to Astoria on the Oregon Coast.  One of my friends lives in Astoria, so she gave us a tour of the town.  Seeing the Goonies house was at the top of the list of places we wanted to see. 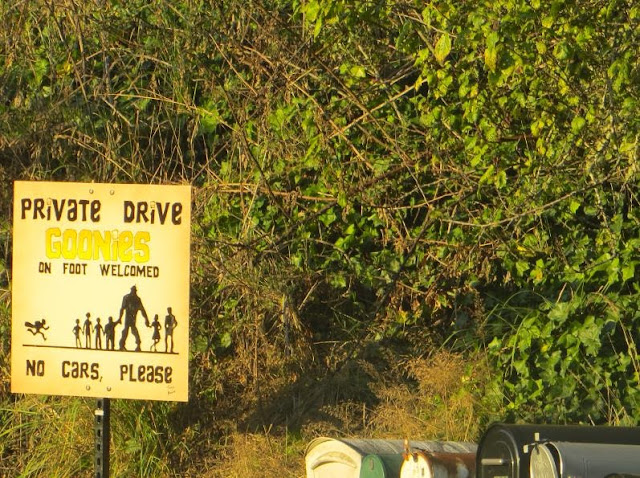 We parked the car on the street and headed up the private gravel drive that leads up to the house that is up on a hill.


Visitors come by the thousands every year to see and photograph the house - here's the view of the water down below the hill from the gravel drive... 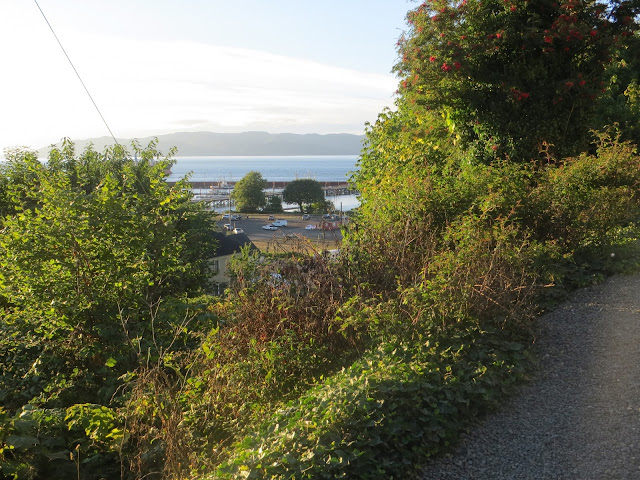 Filming started in 1984 and was starred in by well known Gen X actors who were teenagers or pre-teens at the time.   I remember there being a lot of talk about Goonies on my elementary school playground when it was in theaters.   I finally saw it on TV a few years afterwards. 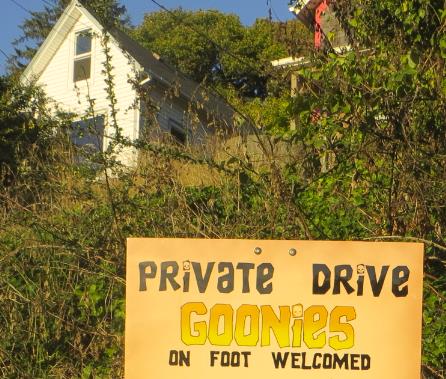 The mayor of Astoria declared June 7th as the official Goonies Day for the city to commemorate the the day the film was released in 1985.

Shadows of my friend and me as I lift up my camera to take a picture.... 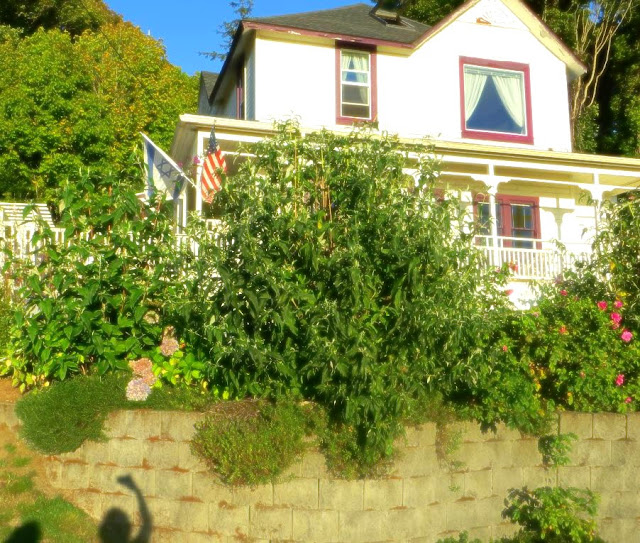 The skylight to the attic was open - the attic where the kids in the movie find the treasure map leading to the hidden Oregon Coast pirate treasure.  The story line is full of all the Spielberg traits that made for great movies in the 80s.  Before the trip, I watched the movie for the first time in two decades.  It was interesting to see it as an adult - maybe a  little edgy at times for a kids' movie, but even the edgiest characters seemed to ultimately have good hearts. 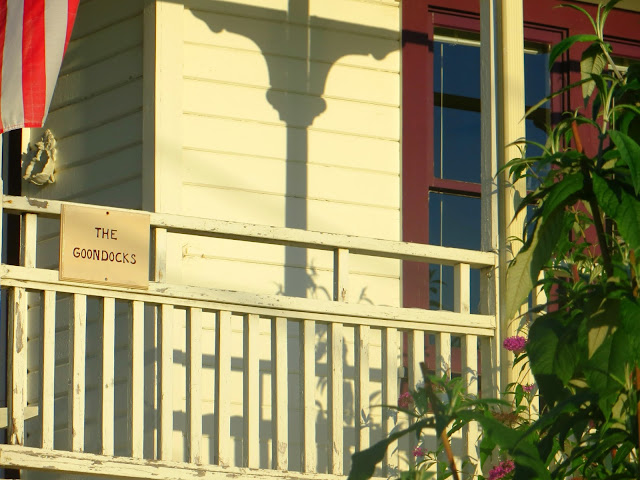 You can't go onto the property since someone lives there, but I zoomed in little bit with my camera to capture a closer image of the Goondocks sign.... 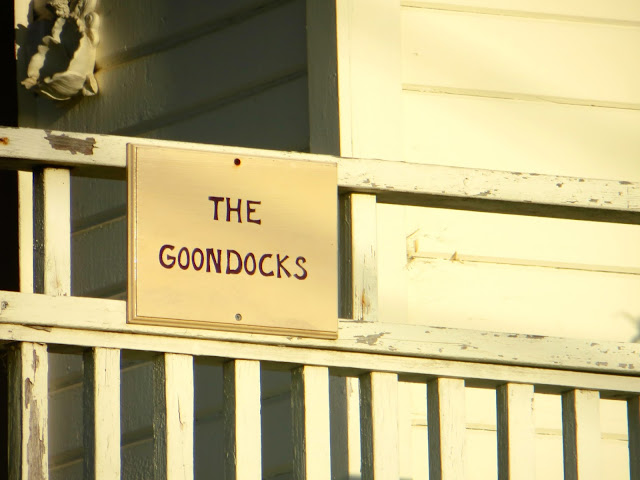 The "Goondocks" was the fictional name of the neighborhood where the Goonies lived in the movie.  Astoria is a port city and just below the house are docks on the Columbia River, which connects with the Pacific Ocean.

Another view of what you see looking out from the front of the Goonies house - the bridge that connects Oregon and Washington. 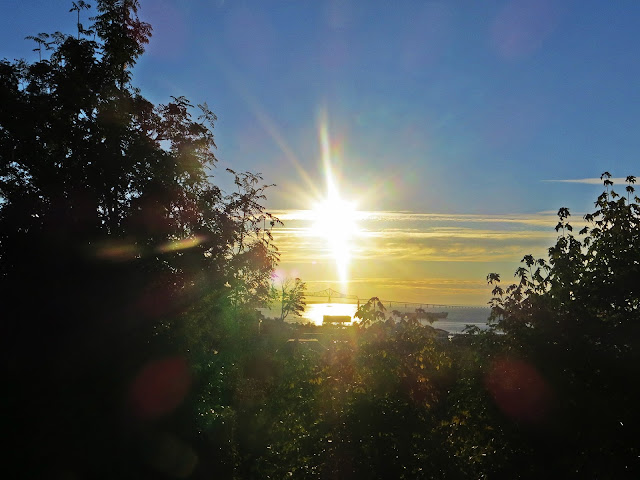 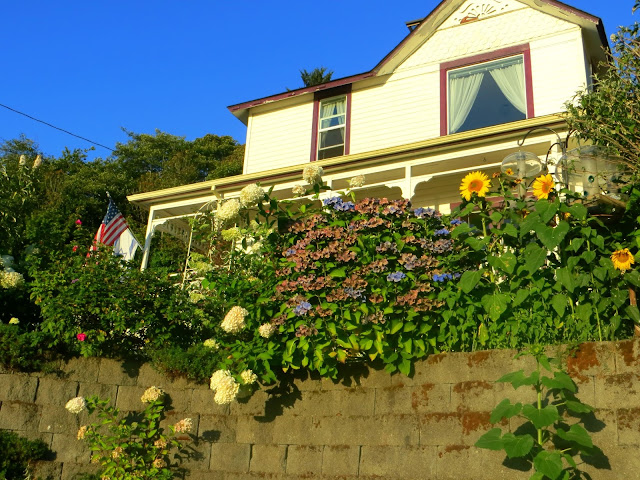 Hyacinths, sunflowers and all kinds of other flowers were taking in the rays of the sun that day from the front yard. 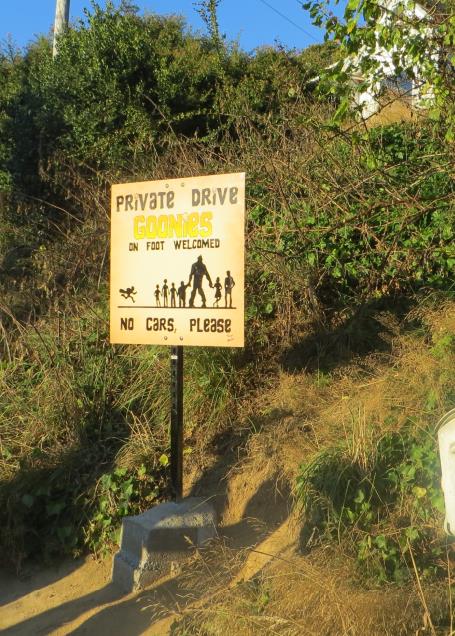 Gen Xers who played characters in the film were: Martha Plimpton, Sean Astin, Josh Brolin, Jonathan Ke Quan, Jeff Cohen, Kerri Green, and Corey Feldman.  I'd have to say Martha was my favorite in the film.  I even got glasses that looked like the ones she wore in the film when I was a kid...she looked way better in them than I did!


In the film, this was the house of the two characters who were brothers - Mikey (played by Sean Austin) and Brand (played by Josh Brolin).

Above is a snapshot of my friends walking up the drive to the house.  Seeing this house on my own would have already been great.  Seeing this  house -  an iconic piece of Generation X history - with four other Gen Xers that I grew up with, made the experience a hundred times better. 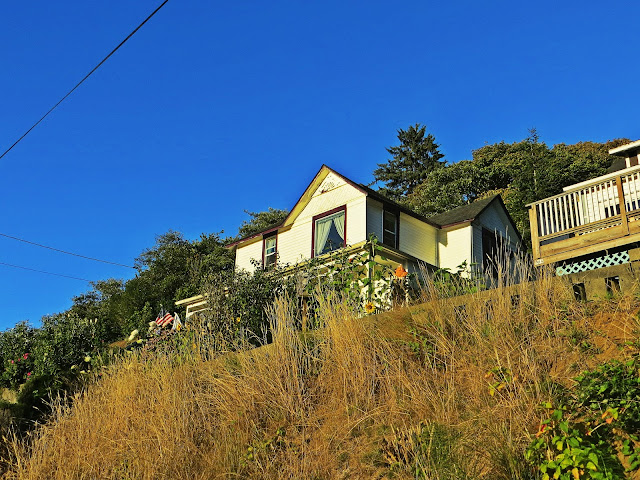 Summer comes to and end.  Soon enough, all this wild grass will be green again, the bright sky will be overcast, and the Goondocks will quietly hold memories of all the feet who walked up to this house...Gen X actors who have long since grown up, and Gen Xers who have come to see a place from the imaginations of their youth.

For panoramic photos of "The Goondocks" and the Oregon Coast landscape where a lot of the movie was filmed, make sure to click this link:

(c) 2013 Writing and photos by Chlo Koffas- all rights reserved
Posted by Chloe Koffas at 7:50 PM No comments: