More from the Reagan Museum...here we have a sampling of the "Just Say No!" campaign of the 80s... 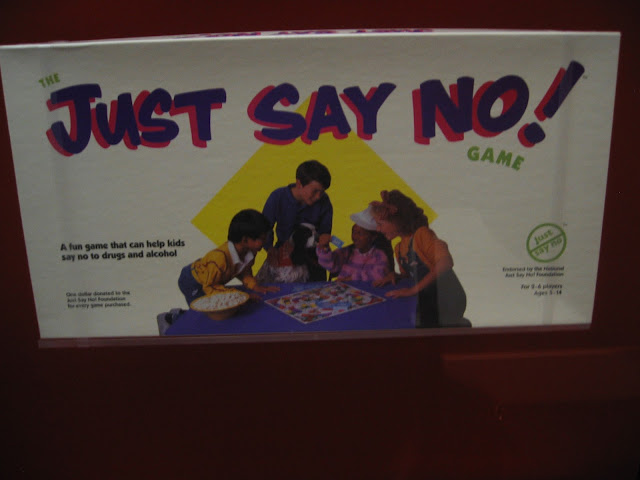 It's "The Just Say No!" boardgame to enjoy with neighborhood friends. 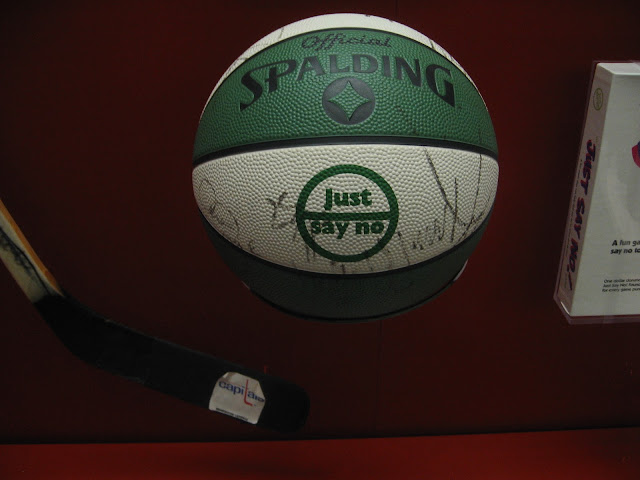 "The Just Say No" Basketball 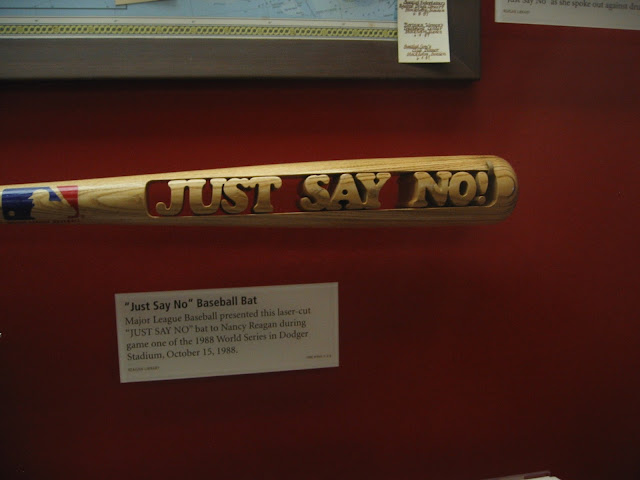 "The Just Say No!" Baseball Bat - fully worthy of an exclamation mark. 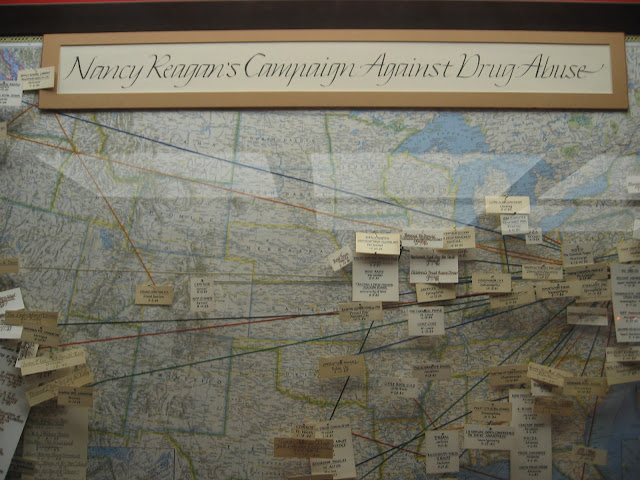 Remember these bulletin board maps that would show you places where stuff happened and colored string to show you the journey someone took to get there?  These days with infographics and other digital options, I'm not sure who would have the patience to put something like this together...do all the pins and strings just fall out when you move the map? 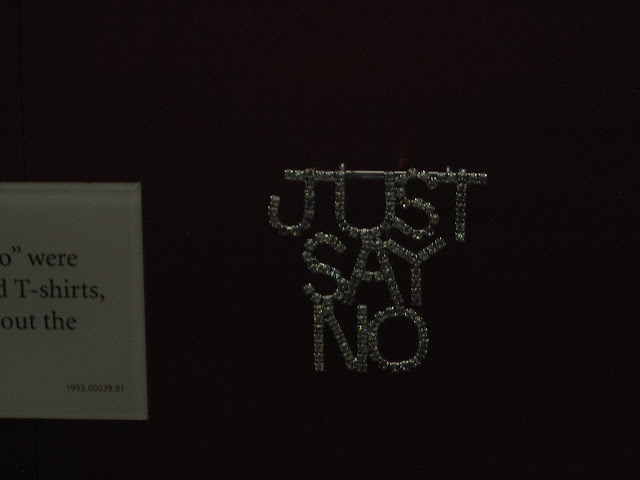 A bejeweled "Just Say No" pin?  I don't know about you, but I would've been beat up in the school parking lot for wearing something like this...maybe it was for old ladies of the 80s to wear to their high teas where they would talk about semi-hopeless social causes...like us ruffian 80s kids....


Posted by Chloe Koffas at 9:40 AM No comments:

Email ThisBlogThis!Share to TwitterShare to FacebookShare to Pinterest
Labels: Just Say No, The Gen X Chronicles

January 28, 1986: The launch and structural failure of the Challenger Space Shuttle.

The Reagan Library and Museum in Simi Valley, CA is what I refer to as "The Gen X Chronicles" because it documents many of the world events that happened during the formative years of Generation X which is a big piece of our collective experience.  One section of the museum focuses on the Challenger launch.  Gen Xers on the East Coast remember this event happening around noon of their school day.  For Gen Xers like me who lived further out west, we remember this happening in the morning, with most of the school day ahead of us.  We remember the strangeness of going through the motions of the rest of the day when an enormous catastrophe had happened.   The structural failure of the Challenger and the simultaneous death of seven American heroes that all of us school kids had spent so much time getting to know from our classrooms, left an enormous impression on us.

Below is the Challenger Space Shuttle in a fleeting moment of exquisite beauty - clear blue sky, and an explosion of heat that was meant to propel those on board to the stars.  Did these birds, rising up in their choreographed movement with the lift-off know that disaster was only moments away? 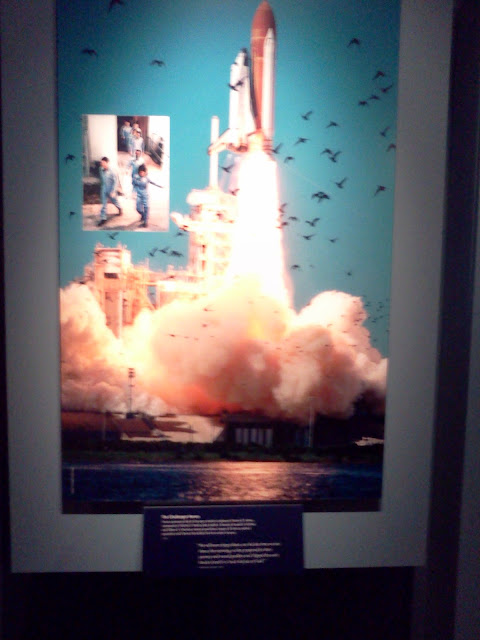 Though parts of that day are now hazy for me, I am able to recall moments of it with intensity - the moments that were the heaviest with the most sorrow and confusion are the moments I remember most clearly.  I remember that all of us at my elementary school were very unprepared for what happened.  For some reason, I was a visitor that day in a different classroom than my own, and I remember being gathered with other kids around a TV full of anticipation.  When the unthinkable happened before our eyes, the teacher became clearly upset and very quickly shut off the TV. Through the eyes of a child, I interpreted her response as anger at us as she abruptly told me and others to leave her room immediately and go straight back to our regular class.  I couldn't completely process what was happening.  I couldn't figure out why we she was so agitated at us, and I couldn't figure out what we had done wrong.  Through the eyes of an adult, it is clear that she was holding in a huge amount of emotion and was trying not to cry in front of us.  She was in a very difficult and awkward situation.  The walk back to my regular classroom was also very awkward.  Because I could not process everything and because the shuttle images on the TV had gotten turned off so fast as I watched them, there was a part of me who thought maybe everything was still okay, that the explosion we saw was maybe just coming from some piece of debris that had fallen off the shuttle, and that everything was going as planned.  It took the rest of the school day for me to slowly process the tragedy that had happened, and the whole day felt surreal.  After a very long time of anticipating this amazing day and moment, it all came to an end in a way we hadn't expected.  A certain emptiness hovered above my head, above my school, and above my country. 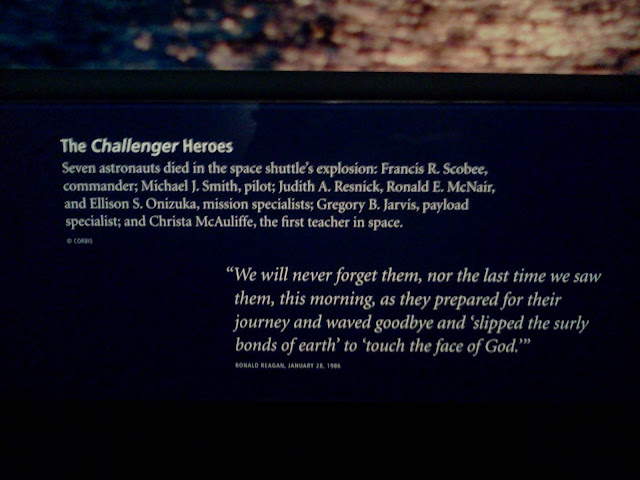 A few weeks later I wrote letters of consolation to each of the seven families. So did a lot of people.

This is the footage being played next to this exhibit - the 1/28/86 presidential address that many watched as they were experiencing the shock of the event...

Just after the two minute point of the clip is his message to us as Gen X kids: "...the future doesn't belong to the fainthearted, it belongs to the brave...." When I look at what my generation had to endure in the following decades all I can say is that those words proved to be true:

I used to walk through museums as a child and wonder why old people would be quietly shedding tears in corners after seeing mementos of some war or time in history that they had personally experienced.  Back then, life for me was new and I had almost nothing to look back on.  After seeing images of things that have affected me personally at museums or in documentaries, I am now the one trying to hold back the tears.  This was just one of many crises that would play out in the lives of Gen Xers.


Posted by Chloe Koffas at 7:22 AM No comments:

The Gen X Chronicles: Part Five - The Berlin Wall as the Sun Descends


The fall of the Berlin Wall was one of the significant world events of Gen X's formative years.  From where it stood in Europe, it saw many days of cold, gray skies.  Now a large piece of it looks out over the Simi Valley to the mountains where the sun descends on the desert and ocean breezes travel over open land.  With my hand reverently touching the cement, I could feel a certain hope - I could feel it swallowing up hopelessness.

There have been walls in my life that held me in, that seemed insurmountable, that I feared would never let me out.  When I have found the grace and the resolve to walk past those walls, it is has been astounding how those barriers began to seem so small compared to the limitless possibilities around them.  Caught up in the problems we are facing today, it feels that things will never change.  It's the larger picture that shows us that the potential of our lives is enormous.  Beyond that, if we look out on the horizon, even while holding the broken pieces in our pockets of this fallen world that has disappointed us, we are reminded that there is something beyond this, something more than just this.

For those who grew up in a time of unraveling and seemingly endless crises in history, may you live to see a time when you can walk around it, and then past all of it, through the shadows of impermanence, and into the light of what does not fail us. 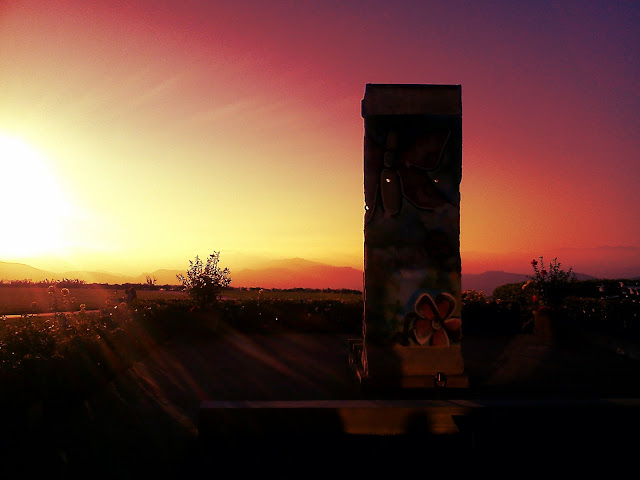 "For believe me, this world that seems to us so substantial, is no more than shadowlands.  Real life has not yet begun."

The Gen X Chronicles: Part Four - The West Side of the Berlin Wall


While there are many pieces of the Berlin wall more or less this size in different parts of the world, I think this six ton piece is the most beautiful one.  I was hoping to get some photos of this piece in California where it stands in the warm sun each day.  I can't think of a more monumental symbol of history from the growing-up years of Generation X than the crumbling of this wall.  So it was with enormous anticipation that I walked up to this slab of cement that includes the word "freedom" written on it.   It was with humility for what this wall symbolized that I took these photos....

The Berlin Wall: Photography by Chloe 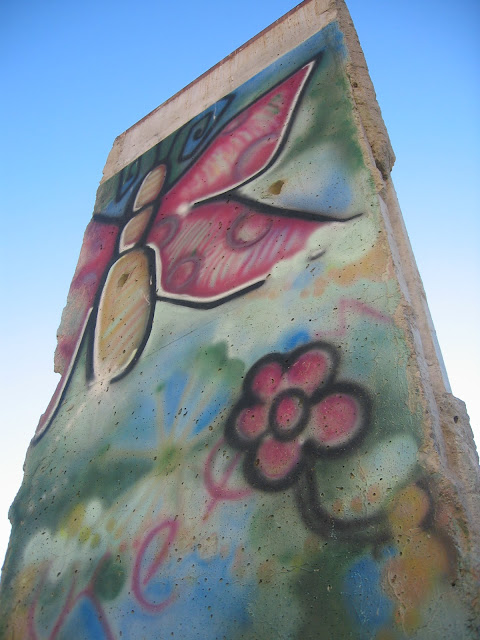 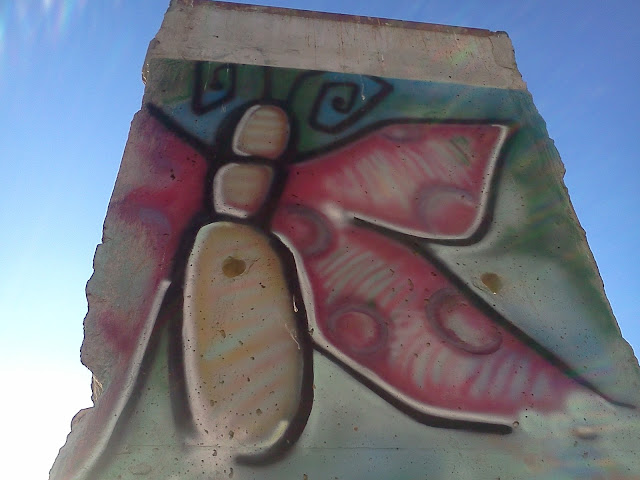 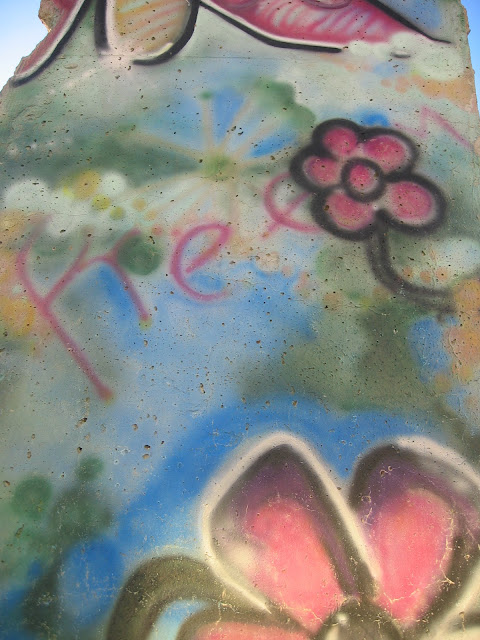 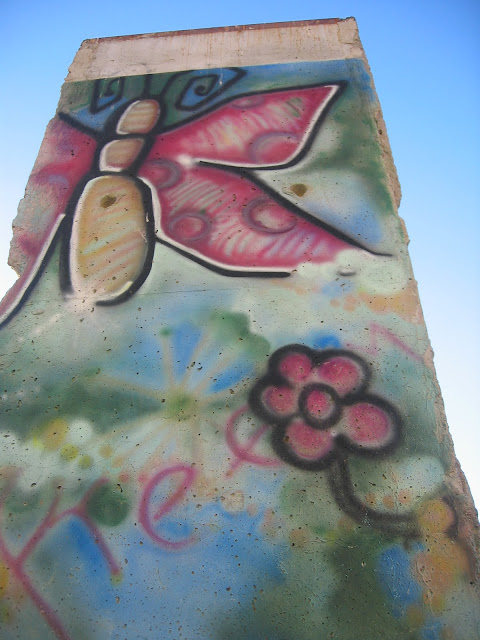 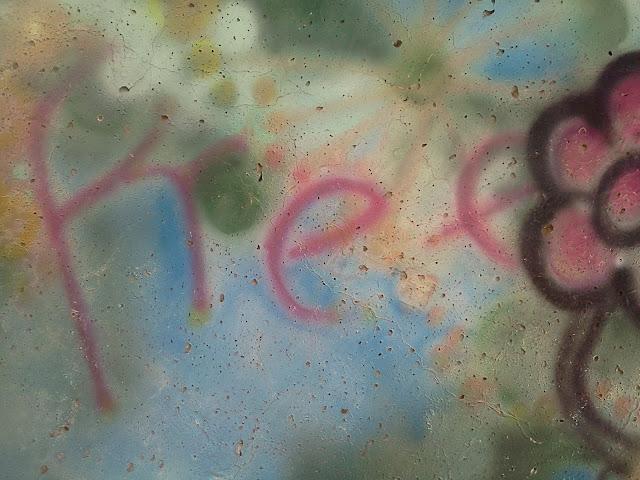 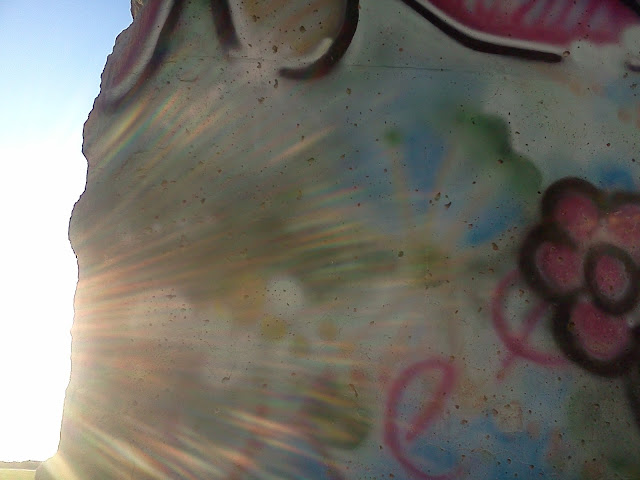 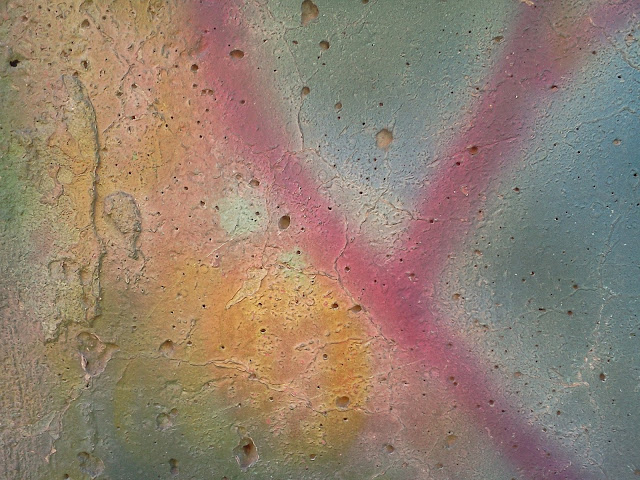 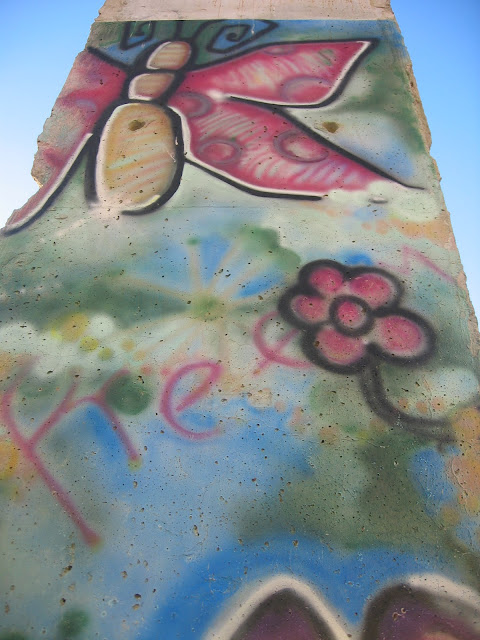 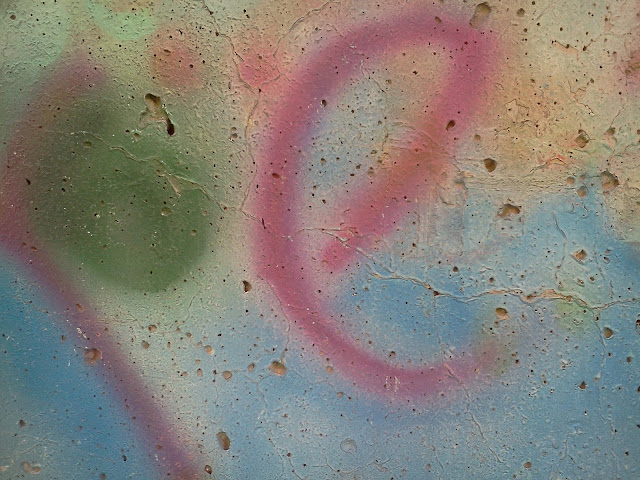 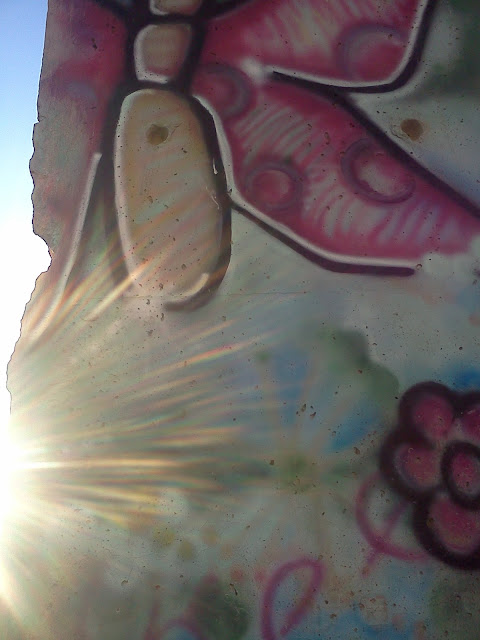 In the weeks before approaching this wall, I imagined what it would be like to take photos of it.  I was hoping that I could catch the sun behind it as it was descending.  Beyond that, I was hoping I could capture sunflare coming out from behind the wall, exploding in colorful hues to mirror the artful graffiti on the cement.  Everything I hoped for that day came true.

My guess is that these images came from a spray paint can held in the hands of a German Gen Xer.  I hope to someday find out who it is.  Here, in this beauty, is the artful soul of mankind that finds another way to survive, to begin again, and to create.

Here's to hope...and to new beginnings.

Posted by Chloe Koffas at 12:59 AM No comments: