The Last Days of Summer

If I had to make a list of the symbols of Gen X 's formative years, this giant slide would definitely make the list.  I remember being at a carnival as a six years old - climbing the colossal staircase and racing down on a rectangle of burlap.

I remember standing at the top of the slide like I was on top of the world.  I refused let fear take over as I stood looking at all the faraway people below.  Instead, I chose to embrace the rush.  I think I'm in that place in life again now...﻿

This week my family and I went to Oaks Park in Portland and it was my little one's first time to go to an amusement park.  She loved it more than I would have even expected.  Whether it was the mini roller coaster, or the kid-sized hot air balloons, she was fearless. 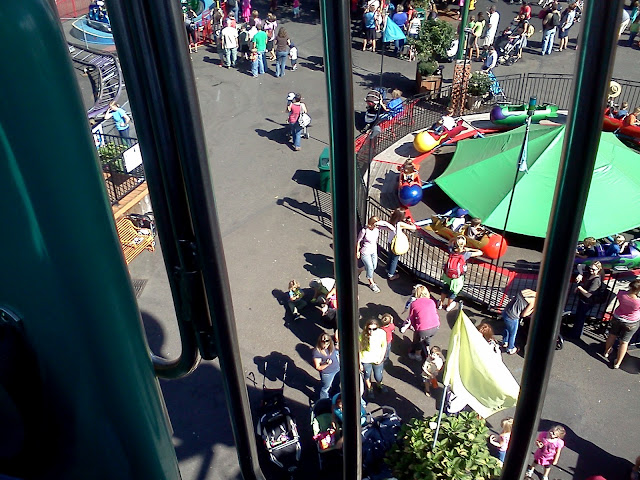 There is a certain joy that comes when we don't dwell on the days of the season that have already passed us by, but when live fully in this day.  These are the last days of summer, which is a chance to drink up every last bit of it.  And there is a certain joy in those up-high places, where we can choose not to be afraid. We can choose to let the fear wash away as we embrace the rush. 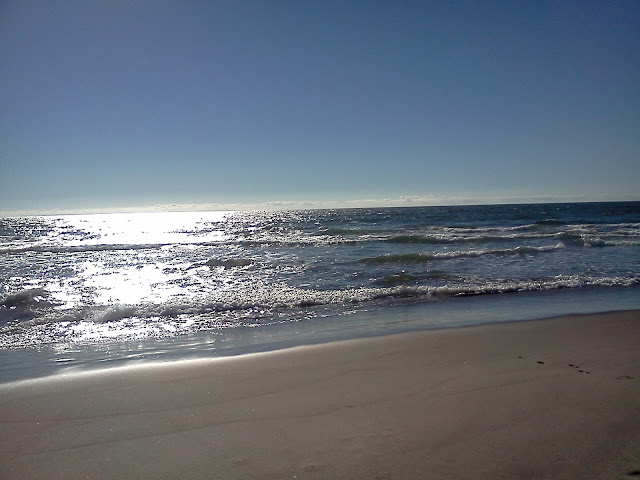 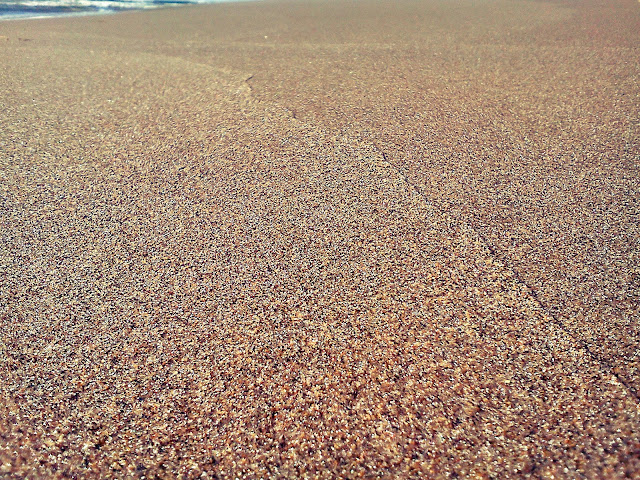 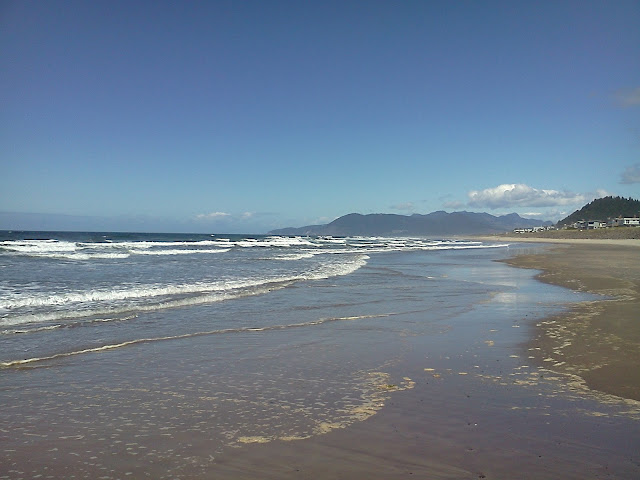 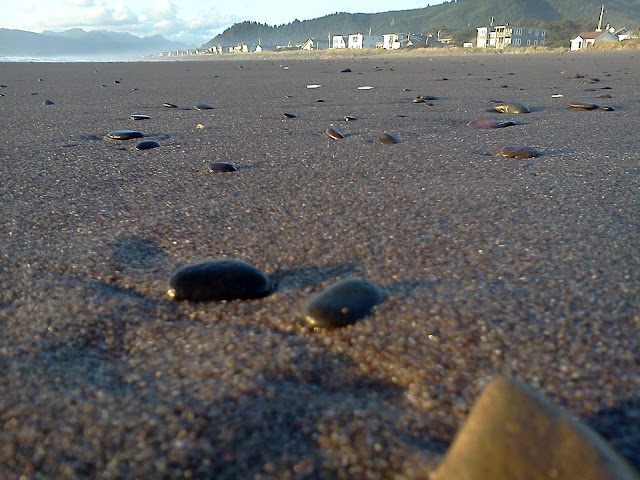 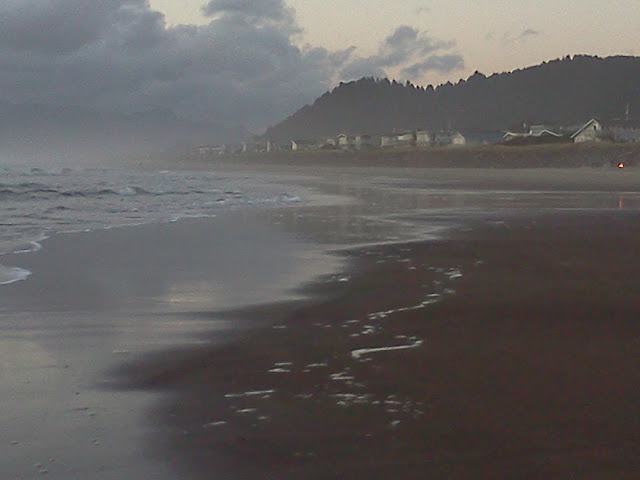 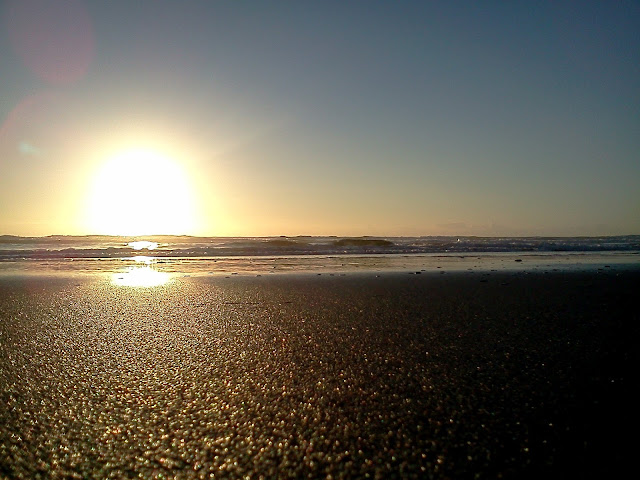 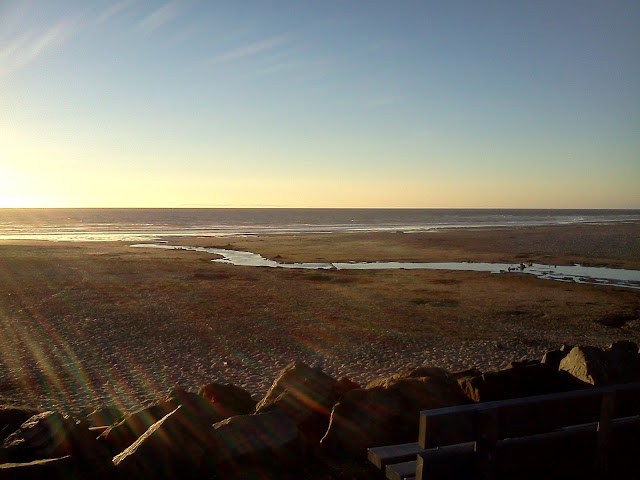 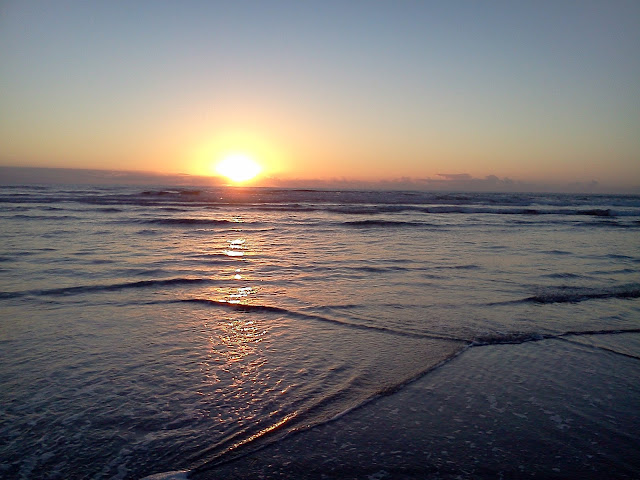 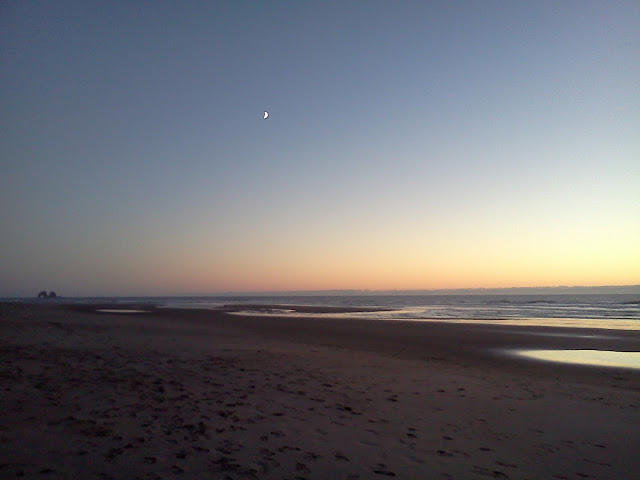 Posted by Chloe Koffas at 8:12 AM No comments:

When I was a kid, I would stand in the summer rain as it would begin to fall.  There was this amazing scent during monsoon season when the New Mexico rain would start to fall on the asphalt and I always wanted to be there to inhale it.   The dust would be brought down from the air, along with the smell of ozone, and dry desert would spring to life as cactus blooms would open and thirsty sand would drink in the water.  The scent and feel of the desert rain always injected me with excitement and hope.   Standing at the edge of the ocean when the breeze comes in strong gives me that same rush. 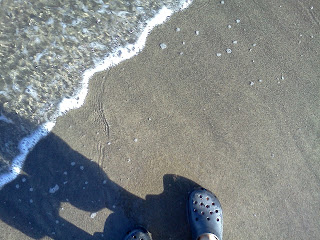 Right after the Chernobyl incident, my family told me not to go stand out in the rain - that I should maybe wait a few years for the radiation to die down. Chernobyl became part of the background of the childhood of Gen X.  I remember how many kids in those times did their annual science fair projects on acid rain.  I wondered how we were supposed to grow up in  a world where pollution and toxicity were all around us, I remember the panic and anxiety. 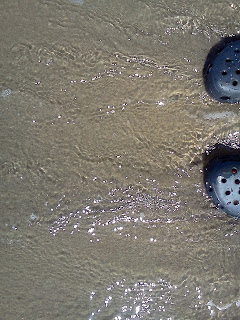 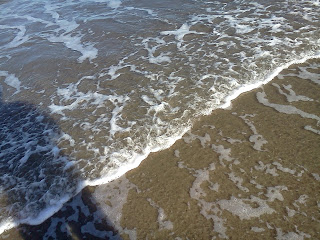 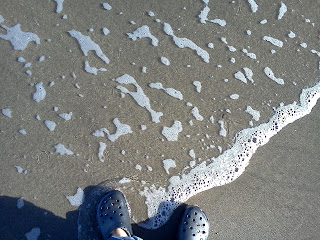 "At the edge of the ocean we can start over again."  -Ivy

Your Choices Will Change the World 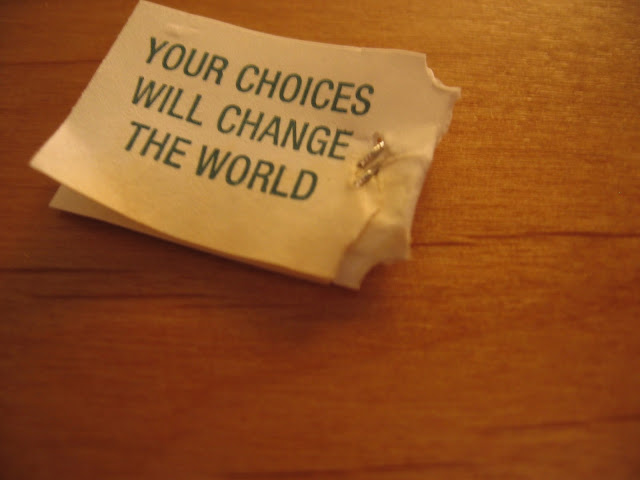 Sitting at my keyboard with my hands unable to type, I was straining to articulate a certain message that I wanted to convey to Gen X.  While I sat searching for the right words to resonate,  the tag of my tea bag was dangling from the steaming mug to my side.  It was yelling out a message to me that was simply stated but profoundly true, and exactly what I was trying to say.  A little tag with a big message:

YOUR CHOICES WILL CHANGE THE WORLD.

You've got more than a lot to offer.

Your choices will, in fact, change the world.

There is an amazing film about Generation X currently in production called Xingularity.

a point or region of infinite mass density at which space and time are infintely distorted by gravitational forces and which is held to be the final state of matter falling into a black hole.

In Natural Sciences:
a point in space time in which gravitational forces cause matter to have an infinite density and zero volume.


And the film itself is described by those creating this amazing project:

Xingularity is a wholly independent, raw and unflinching deconstruction of the variable that is Generation X.

An attempt at exploring and redefining aspects of the most unconventional, ill-defined and misunderstood generation in American history.

Much like our lives, it is a 'work in progress'.


Here is the YouTube teaser - I shed a few tears as I watched many important pieces of my Gen X history and the history of the Gen X collective experience unfold...

The film's web site is beautifully done and you'll find a nostalgia link listing many events and issues that Gen X is familiar with, along with many words that describe who we have been or who we are now like: indefinable, angry, rebellious, abandoned, questioning, and anti-establishment.

Manny Merchan, Kerri Merchan, Kendra Kabasele, and all those working on the project are in the process of creating something well-researched, insightful, and undoubtedly profound.  I can hardly wait to see where this will take us...

Email ThisBlogThis!Share to TwitterShare to FacebookShare to Pinterest
Labels: Xingularity

Ladybugs and the Space-Time Continuum

Bonus entry: Ladybugs and the the Space-Time Continuum - a digital story board blog entry for kids or Gen X kids-at-heart... 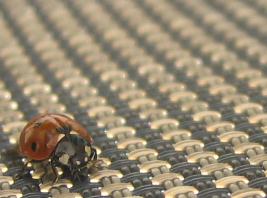 There once was a ladybug that went for a mid-afternoon walk.  It seemed like an ordinary day with ordinary things going on all around her.  There wasn't much to be excited about. 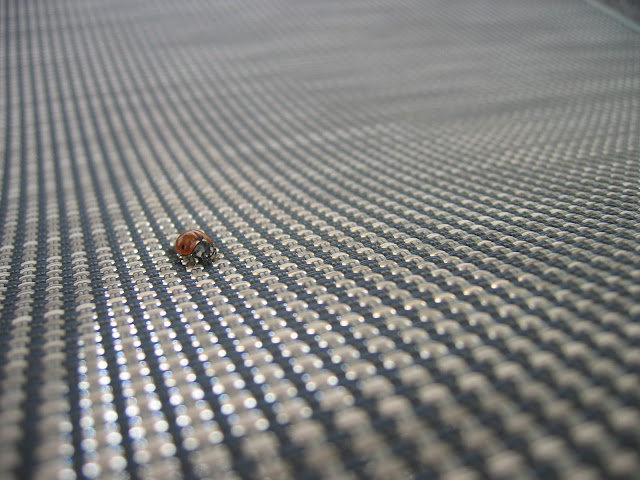 As it turned out, however, her day became so much more than ordinary - especially when she began to see that the texture on which she was walking was actually the space-time continuum.  This got her thinking that if she kept on walking, she could make it to the edge of the universe.  She planned to tell all her friends. 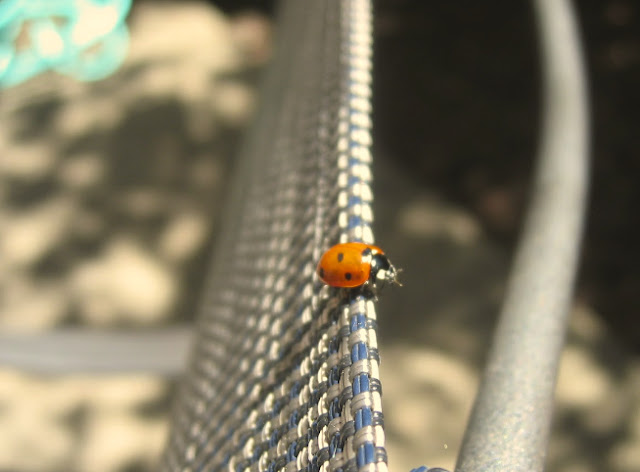 But what would you do if you got to the edge of the universe and the only thing over the side was a coiled up garden hose and a backyard patio? 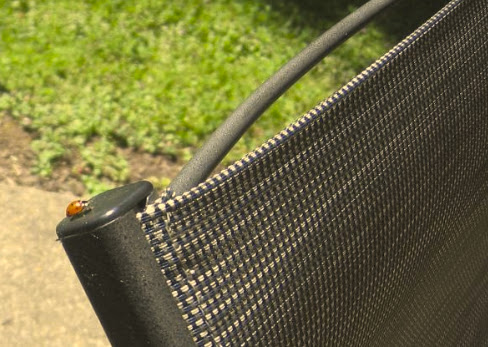 Posted by Chloe Koffas at 4:04 PM No comments:

The Colors of a Generation Z Childhood

For a Gen Xer born in the 1960s, they may remember a childhood full of earth tone colors that had been popular in the 70s and up into the early 80s.  A Gen Xer born in the 70s may remember these earth tones from early childhood giving way to the fluorescent colors in their teenage years which became popular as the 80s went on.  I remember the early 80s of my childhood being full of nature-inspired Holly-Hobby images, patchwork pieces and fresh-picked meadow flowers.  This is followed by memories of the sweatsuit I wore for P.E. in middle school that was black with a sonic-boom-kind-of-pink around the edges.  This gave way to the flannel I wore during the grunge era at the end of high school,which was, of course, the antithesis of anything fluorescent or pink, and any kind of sonic boom gave way to Sonic Youth. 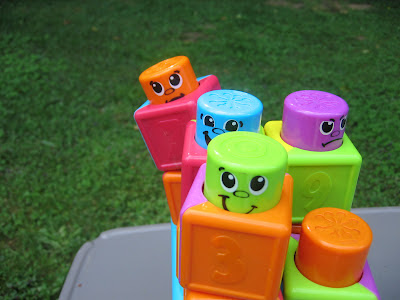 For the most part, Generation Z are the children of Generation X.  I sometimes wonder what colors will become part of my Gen Z daughter's childhood memories. One popular color combination for girls in the 2000s have been a mixture of brown and pink - a revision of an early 80s motif.  My little one's summertime backyard toys that have been left in the sun too many times often end up becoming a paler version of their original self and remind me of the photos we can filter to make them look 70s-ish, making them look like they have faded with time.  Other toys I see that belong to kids in my life seem purposely radiant and happy - and I hope, as the present gives way to the future, that is exactly the kind of childhood that Generation Z will be able to say they had.

Posted by Chloe Koffas at 2:07 PM No comments: